Back to all posts

A Goal and Milestone

Another goal and milestone has been reached in my songwriting adventures. Yes it has been an adventure, because that is where I try to get my ideas. It started back in Viet Nam with Mild Mannered Man (1968) till today with Standing on the Corner.  Not a story of mine but a friend.

A week ago this past Friday, Russ Williams, Georg Hagelmann and co-host Rebecca Hosking, gave me a nice review of my compositions and EP, soon to be released.  It keeps getting pushed back each month, for new ideas, such as two possible videos.  Then on Tuesday morning I received a phone call from Grant Noel, that one of the songs off the EP would air at number 4 on World Music Stage top 10 count down.  Also included was a short phone interview of were I got the idea for Life of Ease.  If that wasn't enough to build my ego up, Friday night when The Pack Showed aired, Georg posted The Radio Indie Alliance top 10 and there I was listed at number 10.  It is an honor for the support of fans to request John Cotton Music. From all indie artist,singer/songwriter's and musicians,we wouldn't be; without you, The Fan.............John Cotton 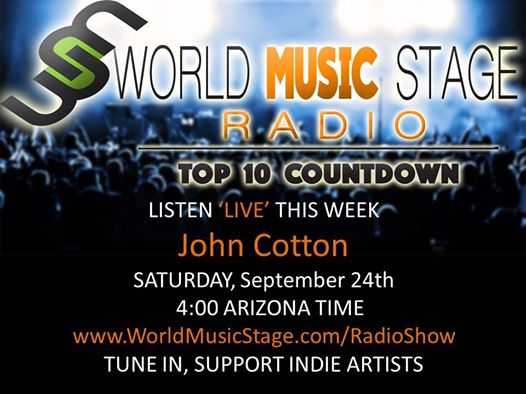